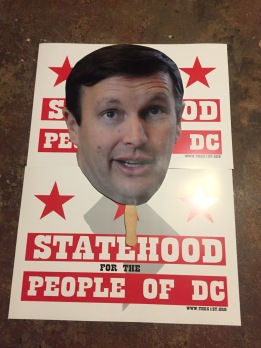 A Connecticut resident wrote to Senator Chris Murphy asking him to support D.C. Statehood. Below is the full response which was shared with me followed by my responses to it as there is a lot to unpack and clarify with his letter:

Thank you for contacting me about voting rights and statehood for U.S. territories and the District of Columbia. I appreciate your correspondence and hope that you find this response helpful.

Currently, American Samoa, Guam, the Northern Mariana Islands, the U.S. Virgin Islands, and Puerto Rico are each represented by a single delegate in Congress. While the Constitution did not provide specific guidance on how territories should be represented in Congress, under current congressional rules, these delegates share many of the same privileges that members of the House of Representatives enjoy. These delegates can speak on the House floor, propose bills and amendments, and serve and vote in committees. However, delegates from U.S. territories do not have the right to vote on the House floor, which would violate Article 1 of the Constitution. Additionally, residents of U.S. territories are prevented from voting in Presidential elections, as Article 2 of the Constitution only allows states to appoint electors. Allowing territories to vote in presidential elections would require an amendment to the Constitution.

The District of Columbia also has representation and partial voting rights in Congress. Currently, the District is represented by Congresswoman Eleanor Holmes Norton, who shares the same congressional rights as delegates from U.S. territories. After ratification of the 23rd Amendment in March 1961, District residents may vote in Presidential elections. A number of different proposals have been put forward to change the status of Washington, D.C. Advocates for statehood have suggested making the District the 51st state, with full representation in Congress. D.C. statehood bills have been introduced in 1993, 2007, and 2009, but have failed to pass. Others have suggested that Maryland should absorb the District, as the current territory of the District was ceded to Congress by Maryland in 1790.

Please be assured that I will be sure to keep your concerns in mind if legislation concerning voting rights or statehood for territories or the District of Columbia ever comes before me in the Senate.

Thank you again for contacting me about this matter.  I appreciate hearing from you and assure you that I will always do my best to represent the views of my constituents in the Senate. In the future, please do not hesitate to call me in my Connecticut office at (860) 549-8463 or in my Washington office at (202) 224-4041.

That’s all I have for now but if you’re equally or even partially angered by this milktoast response please do call (202.224.4041), write, or tweet at Senator Murphy and ask your family and friends to do the same. He should follow through on his words from 2017, and support D.C. Statehood by cosponsoring S. 1278.

1 Response to Setting the Record Straight