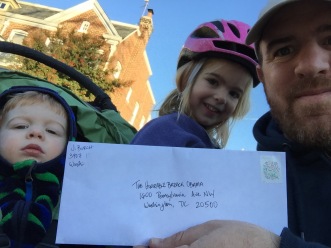 Below is a letter I sent to President Obama imploring him to advocate for D.C. statehood in his upcoming State of the Union Address on January 12, 2016. Please lend your voice to this effort by contacting the President here or tweet your request to @POTUS, the more voices the more powerful!

I wanted to make a final plea to you, one I have made on several previous occasions, to advocate for D.C. statehood in your upcoming State of the Union Address. I was born and raised in the District and I, like you, am now raising a family in the District but my family, unlike yours, lacks full and equal representation in Congress. Like you we pay our fair share of taxes yet we have no control or say on how those dollars are spent.

While I could fill page after page with information and facts making the historical case for you to support statehood I wanted to make the case to you on a more human level: from one father to another. Like many I was excited by your election for many reason. On election night 2008 my wife and I were living in Accra, Ghana, when the election was called in your favor and from our apartment we could hear taxi cabs all over Accra blaring their horns in celebration. My wife and I cried tears of joy at your election and were filled with great hope that America was turning a critical corner to becoming a more just, loving, understanding, and inclusive nation.

We moved back to the U.S. and the District in 2009, and we were excited for what the future had in store for us and our country. In late 2010, we welcomed our first of two children into our family. Then in 2011, you participated in a deal with Speaker Boehner that reminded me bluntly what it means to be an American citizen living in the District of Columbia. While trying to broker a deal to pass the federal budget you uttered the words and thereby cutting a deal that forever changed my opinion of you and our status.

When you said “John, I’ll give you D.C. abortion, but I’m not happy about it” you kicked me and many in the District in the gut. With that short sentence you used the people of District of Columbia as a bargaining chip. You didn’t treat us a people, you treated us as an object that could be used and bartered to achieve a political outcome. In 2011, you acknowledged and took advantage of the fact that despite the promise of America we are still the unfinished business of the American revolution. We in the District are not only taxed without representation but we lack final control over our own local budget and laws and are subject to continual congressional meddling in our affairs.

Mr. President, I am under no illusion that we will achieve statehood for the people of D.C. during your presidency, however, by advocating for it in the state of the union you could both educate the nation about this issue and put it on the national agenda. We, the people of the District of Columbia, are not seeking special treatment we are seeking equal treatment and what could be more American than that? I implore you, from one father to another, to speak up and speak out for all of us in the District in your State of the Union and tell the nation that my children simply deserve to be treated equally with yours.

P.S. We would also welcome you to our home in Brookland for a ‘D.C. statehood beer summit’ to help show the nation that we are just like them.