K.I.S.S. for the District 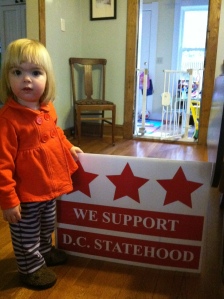 She Wants Statehood, So Should You!

In the lead up to the inauguration there was a lot of hubbub around the District about how to best articulate what we want related to our political status to the President and our fellow citizens. While, the District Council’s push to get the “Taxation Without Representation” tags on the presidential limo did bring local and national attention to our current state of inequality it did not articulate a vision of what we want. Additionally, the long-winded statement of our principles that was both displayed on the District’s inaugural viewing stand and then by the mayor while walking in the parade said so much but actually said very little.

I have a degree in Public and Urban Affairs and have no marketing background but I do know that we missed a prime opportunity during the inauguration to paint a clear and precise picture of what we want. The viewing stand and the mayor’s placard should have simply said something along the lines of “We Want Statehood”. As future opportunities arise let’s just stick with the old adage: Keep It Simple Stupid (KISS). The last thing we need is to say too much and confuse folks when we can say so much by saying so little. We have a long way to go before we are equal, let’s commit ourselves to keeping it simple, staying on point, speaking with the same voice, and thus the same message. We have so many things to exert our energy on, let’s save some energy but sticking with simple, clear, and consistent messaging.

If it’s simple enough for a two year old to grasp surely our leadership can handle it.