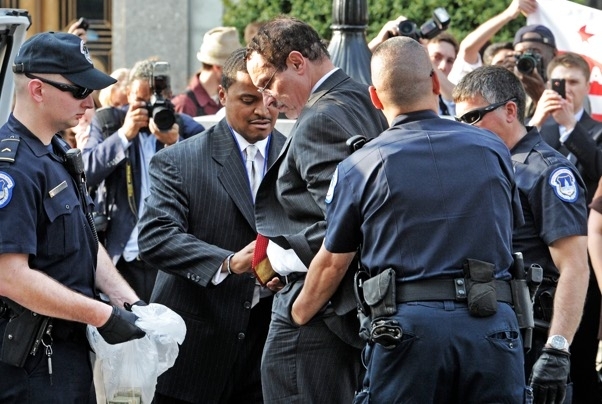 D.C. Mayor Vincent C. Gray and several members of the D.C. Council were arrested Monday at a protest on Capitol Hill, as city officials turned up the volume on their complaints about a federal spending deal that imposes controversial riders on the District.

The spending measure — agreed to Friday night by President Obama, Senate Majority Leader Harry M. Reid (D-Nev.) and House Speaker John A. Boehner (R-Ohio) — reimposes a Republican-backed ban on the District spending its own money to provide abortions to low-income women. It also revives and expands a private school voucher program that has divided D.C. officials.

Forty-one people were arrested and charged with unlawful assembly for blocking passage on the street, U.S. Capitol Police said. Several hours later, at about 11:15 p.m., a group including Gray, Kwame Brown and Michael Brown were transferred from one Capitol Police facility to another for additional processing.

“We needed to make a statement that what happened in the budget process is just unacceptable,” Gray said to a group of 20 supporters and reporters. “It’s time for the people of the District of Columbia to stand up and say we want to be treated like anybody else.”

Gray said he was glad to be going home after seven hours in custody — after stopping at Horace and Dickie’s, a late-closing fish fry off H Street NE.

The protest came on a day when the area got at least some welcome news about the budget deal. Sources familiar with the agreement said it fully funds the federal government’s $150 million share of the Washington Metropolitan Area Transit Authority’s capital budget, restoring money that had been cut in the spending bill originally passed by the House in February.

The fate of other provisions affecting the Washington area, including cuts in federal payments to the District for courts, schools and other items, had not been made public Monday.

Before their arrest, Gray and fellow city leaders attacked the spending deal and the federal officials who agreed to it without consulting the District first.

“I’m tired of being a pawn in a political game,” Gray said, adding: “All we want is to be able to spend our own money.”

Gray and others seized on a report in The Washington Post that in the heat of negotiations on the spending bill, Obama said to Boehner, “John, I will give you D.C. abortion.” The concession by Obama came partly in exchange for Boehner agreeing to drop a GOP-authored provision ending federal funding for Planned Parenthood.

“Is D.C. the president’s to give?” DC Vote head Ilir Zherka asked the crowd Monday. “No!” they yelled back.

Bowser said the women of the District were “under attack.”

“I’ve got to tell you I’m disappointed in my president,” Bowser said, and then addressed Obama: “If you don’t choose us, we won’t choose you.”

The congressional restriction on using local funds for abortions was lifted from the District’s spending for fiscal 2010, which began Oct. 1, 2009. But abortions were not covered under health plans funded by Medicaid and the D.C. HealthCare Alliance until Aug. 1 of last year, because of the process of negotiating contracts and updating computer systems to handle the billings.

Wayne Turnage, D.C. Department of Health Care Finance director, said the city has been billed for 117 elective abortions, totaling about $62,000.

But, he said, that figure includes abortions billed by two of the three managed-care organizations that have contracts with the city.

The third, he said, has yet to submit billings for the period since abortions became covered.

The rally was aimed at swaying Congress to vote against the spending deal this week. But there is little sign Obama or congressional leaders plan to reopen the agreement.

Excited, energenic young entreprenuer helping others explore the great business we are involved in !!!
View all posts by createdc →
This entry was posted in Events. Bookmark the permalink.